Ka Mea I Ole Ai. “The one who lives.” Out of a litter of eight our Blue Nose pit bull puppy was the only one to survive. 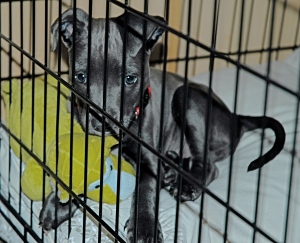 I call him Ka Mea  which means “The Thing.” And that is what he is turning out to be.

I got him at 5 weeks of age. Every two hours,morning, noon, and into the night with flashlight in hand, I stood pajama clad waiting.  Pee and poop. Good, back into the house and into his crate.

By the end of the week I stumbled around, sunglasses on and baseball hat on my head when ever I had to go into public. I barely had time to wash my face. I couldn’t remember if I had brushed my teeth or combed my hair.

The following week. Miracles started happening. He slept through the night. OMG I could see the sun, I could smile and the thought of getting rid of him left my mind. 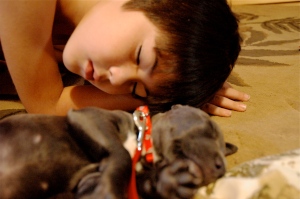 I still had to take him out every two hours during the day but I could do that. Dipping into his cage and lifting his little body out and not putting my face too close to his bobbing head with teeth looking for a place to bite into, I threw my back out.

So the second week I had to lower myself on to the floor very carefully to get him out. Two visits to the chiropractor and $100.00 lighter I got no relief. My kids stepped in to help when they were not at work. 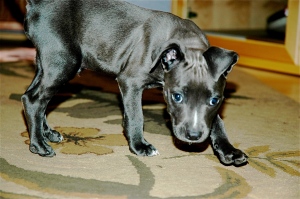 Then week three. Max my Polish Lowland Sheepdog stepped in to help. He stopped growling at Ka Mea as the puppy whirled, leaped and grabbed mouths full of fur and Max started playing with him.

That was wonderful. Ka Mea was up more and much more full of energy. So I would sit outside in the yard and read while Max and Ka Mea played. After a half hour I could put Ka Mea into his crate and he would sleep. 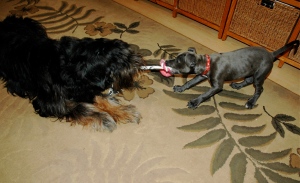 But as Ka Mea headed into his eighth week he also started peeing in his cage. Previously we had lined his crate with paper and a rug in the back for him to sleep on. Then he started tearing it up. Paper was all over and pee went flying.

So I started putting rugs inside. That seemed to settle him down but then he started peeing on them and his pillow and now today, we have done 2 loads of wash just for pillows and rugs and that was before 9 AM.

This morning he went out maybe 7 times from 6:30 to 8:00 AM. Peeing in his cage twice within that time. I snapped at my daughter when she came down to the kitchen at 8:30. I snapped at Max who has now taken to beating up Ka Mea. And I snapped at myself for being so egotistical to think I could raise another puppy at 65 years of age. Oh my aching back.

So now he is heading into his 9th week. He will be getting his second set of shots and it will only be one more month before he gets his last set and we can take him out to the park. That’s if i can last until then. Tips would be appreciated and I’m not talking money. If you have had experience raising a pit bull puppy especially with an older dog I would love to hear about your experiences. 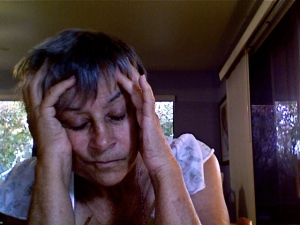