From the small little island of Niihau, 18 miles long and 3-6 miles wide, comes the small little shell, columbella varians sowerly, or more commonly known as the Niihau shell. How small you ask? Well in the above photo of a lei made from a variety of this shell you can count 7,000 of them!

And like the shell, Niihau is small but unique. Niihau was purchased in 1864 from King Kamehameha the IV for $10,000. Imagine owning your own little island at that price today. The Sinclair family bought it to start-up ranching. The native Hawaiians lived and worked there but no other people were allowed to visit or take up residence. It became known as the Forbidden Island. Through the years the island came into the hands of two brothers, the Robinson’s, who were descendents of the Sinclair’s.

The island being isolated for many years meant that the Hawaiian language and culture were in many ways preserved. The Hawaiians were employed by the Robinson’s and provided with places to live.

I had heard people say how there were no modern conveniences and that the only entertainment they had was a radio. I’m not sure how they lived as I never met anyone who had managed to get on to the island. Only friends or relatives of the residents there could visit. But in my research I was fascinated to find that their was a school for the kids that was supported totally with solar power that allowed the children to use computers. Now that seems modern to me.

Alas in 1999 the family had to shut down the ranching. That left residence with very little employment. Now there is said to be maybe 70 Hawaiians living there and during the summer when they go to visit relatives on nearby Kauai, there are as little as 30 left on the island.

The Niihau shell lei which can sell for more than $10,000 is considered now to be the prime source of earning an income on the island. Unfortunately with all of the people moving away there are very few left to collect these microscopic shells. This means that there are very few people who are carrying on the art of making the lei and there are few skilled artisans to make and pass on the craft.

Once a piece of art that you could buy for five dollars on the street may become a thing of the past. But for now the leis are still available and still quite popular. Here are some photos from the current exhibit at Bishop Museum. I’ve also included some sites where I have gotten some of my information from. You can check them out at the end of the photos. 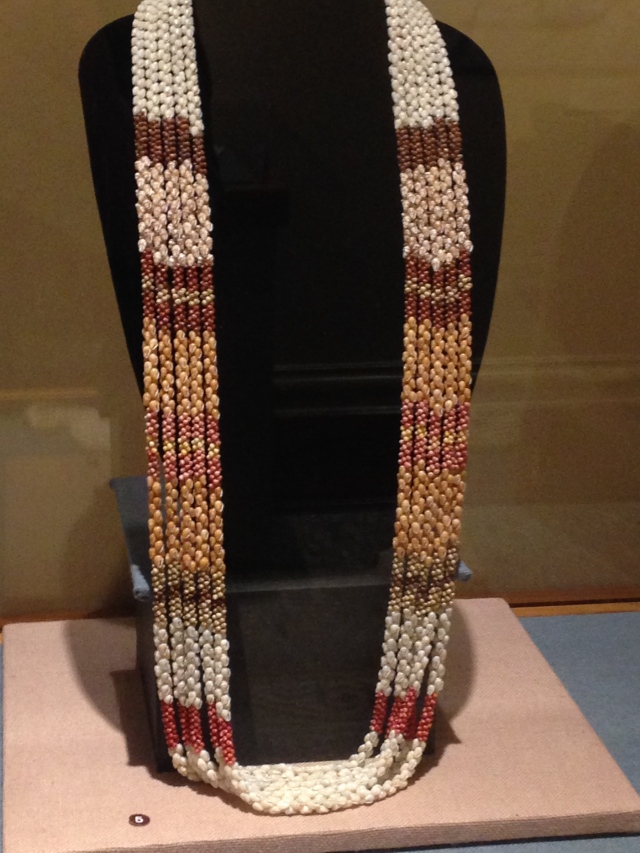 Niihau shell drapes.  From the late 1800’s to early 1900’s. It would have been used to decorate a doorway or display over a mantle.