Even thought this is for my knitting blog I thought you folks would enjoy reading it too.

It is Kyal’s First Birthday.  We all celebrate his day with much joy. It seems just yesterday he was brought home from the Marshal islands by his adoptive family.

We celebrated his day on the beach with our knitting group. The party was held at the beach  on Hickam Air Force base. 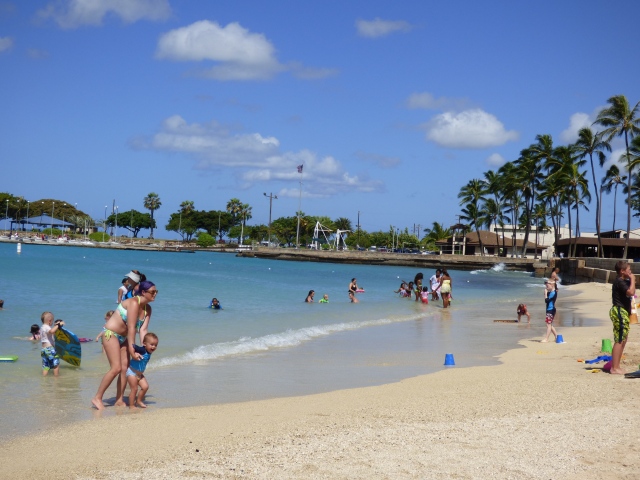 In Hawaii its a sad fact that most of the nicest beaches are located on military land. Land the was supposed to be temporarily used during WW II somehow turned out to be permanent. Ah but I digress.

I thought I would share some of the day with those who have not knitted in Hawaii. For those who have not been on this base you will find it is quite interesting. There are still building that have bullet holes in the walls from the Japanese attack on Pearl Harbor. 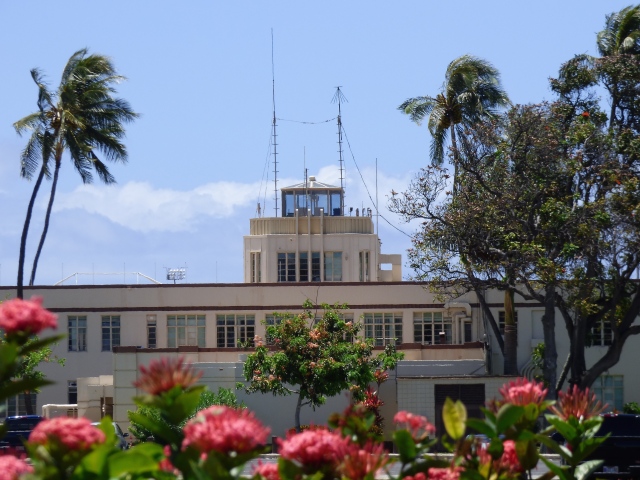 I love this old terminal building. I am not sure if it is still being used for its original purpose and stopping and looking around on a base is sort of frowned upon so I just took the photo and settled for that.

I didn’t stop to check out the information in front of this plane but still it is so beautiful and well worth having the photo. Is that where the gunner would sit up in the very front of the plane?

And back to the beach party.

It was fascinating to stand on the beach and watch these air craft land so closely. It was like beauty and the beast. 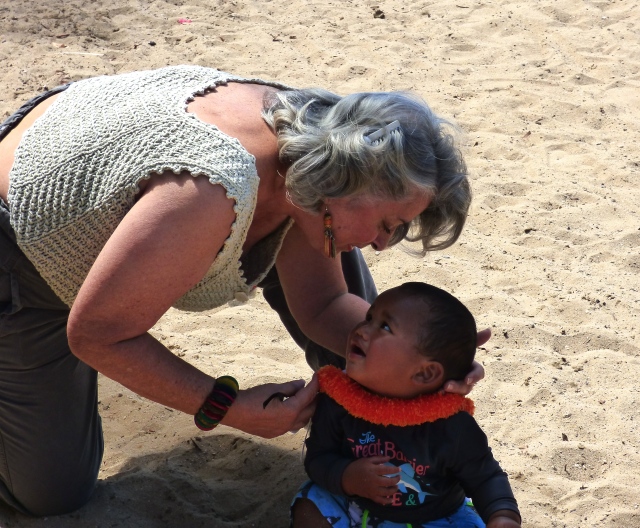 Kyal is celebrating in a bit of the Marshal Island way. It is an open adoption and the adoptive parents are wonderful at making sure he will know his culture and in keeping contact with his birth mother

.Kyal’s new mother knitted these leis. It is tradition in the islands where he was born to put one on the baby and then whisper in his ear all the good wishes for him.

It was my turn and I was worried he would cry when he saw me. It does look like he is about to but actually he gave me a big smile and I just hugged him because he is just adorable. We in our knitting group all adore him. Have I said that already?

And what’s a birthday without cake?

Kim could not resist the crown and wand that Lisa had crocheted for Kyal. She has always wanted to be a princess.

Hmmm, who wears it better?

And where there is Kim there is Lisa they are almost knitted together.

It is Kyal’s First Birthday.  We all celebrate his day with much joy. It seems just yesterday he was brought home from the Marshal islands by his adoptive family.

We celebrated his day on the beach with our knitting group. The party was held at the beach  on Hickam Air Force base.

In Hawaii its a sad fact that most of the nicest beaches are located on military land. Land the was supposed to be temporarily used during WW II somehow turned out to be permanent. Ah but I digress.

I thought I would share some of the day with those who have not knitted in Hawaii. For those who have not been on this base you will find it is quite interesting. There are still building that have bullet holes in the walls from the Japanese attack on Pearl Harbor.

I love this old terminal building. I am…

My friend in Wisconsin wrote that it was 20 below last night. There is ice and snow everywhere.  I can’t even imagine what that must be like. You really have to keep your cabinets stocked with weather like that.

But I would still love to experience it. But there is a caveat. I would only want to experience it if I had a totally stocked food pantry and all the craft items I needed. Of course there would have to be cords and cords of wood by the fire place and enough money to pay an enormous heating bill. Hmm doesn’t sound like I want the cold but maybe a photo of snow on my windows. That would be my version of being snowed in.  If I’m not going out in the freezing cold (I’m no idiot) and the house has to be as warm as Hawaii, why move to a winter climate when a photo will do? That’s the ticket. 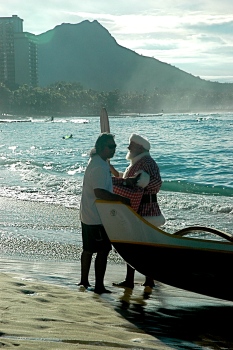 Santa’s no idiot either

This hotel was a little more festive then the Royal Hawaiian. I loved all of the hisbiscus that decorated the tree.  Exactly which Outrigger I was at, I am not sure. I identify it as the Outrigger where I can sit and have breakfast and look out to the ocean as the photograph in my last post showed.

Neither work in my estimation but they are nice to look at. When ever I can I try to encourage people to leave Waikiki. It was once the playground of the Alii (Kings and Queens) but thanks to the corporate world they have destroyed the wave action in that area and have had to bring in sand to replace beaches that are washing away and are trying their best to landscape between all of the cement jungle to try and bring back some semblance of Hawaii to greed gone haywire.

Again, I think of the Eagles song, where they say “call someplace Paradise and you can kiss it good-by.

Herb Kane Painting Of Hawaiians coming to the islands

If you double click on the above photo you will get a better view of the painting. Many people don’t realize that due to excellent navigation skills the Kanaka Maoli (The People) as the Hawaiians called themselves, purposely set out for the islands. They were not blown off course nor did they just happen upon the islands one day when they were out fishing.

Of course there isn’t anything to indicate this in the hotel.  People will just look at the canoe and maybe will connect it to canoe races or beach boys. But as is shown in the painting the Hawaiians came great distances with every thing they needed inside those great canoes.

Landing on pristines shores, devising a land system where all were dependent on one another and there was no such thing as greed. If an alii were to be harsh to his people and demand to much of them they had the right to move on to another area and under another cheif. This would bring disgrace upon the demanding one so it happened very seldom and all lived quite well.

That is until the forigners landed. So here we are in a cement jungle with a few Hawaiian artifacts thrown in, real or not. Too bad we can’t kick out the ruling chiefs of today.

Well anyway if you do decide to stay in Waikiki do rent a car and drive out to the windward side. Take in the real green. The Koolau‘s. I will cover that on another day. 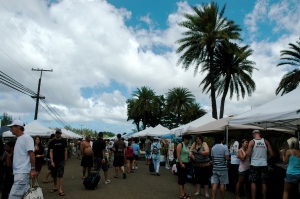 For those of you who had asked what an open Market is. It’s any large lot that is set aside to sell food and or crafts on a specific day. In the case of the Haleiwa Taro Festival it was combined with the Open Market.

Haleiwa is on the north shore of the island of Oahu. It is a small town with coffee shops, unique shopping and where all the surfers like to stay. For me it is a get away from town and a little bit of country. I do the vast majority of my blogs about this area.

These are some of the things that went on at the festival. I will divide this blog into about 4 parts so that I can show you what I saw the day I visited the market/festival.

These are the first entries into the Taro contest. Which I understand were small for a contest.

Here in Hawaii Taro is made into Poi. It used to be a staple on everyone’s table years back in the islands but now poi has become very expensive. It is a labor intensive crop that used to be grown by families but not many do it anymore.

This corm is steamed and pounded into poi. I did not eat this when I first came to the islands. People who did not know better would say it tasted like paste so I believed them. Now I realize that though it is bland in someways it is delicious if you can get it fresh. That is rare. 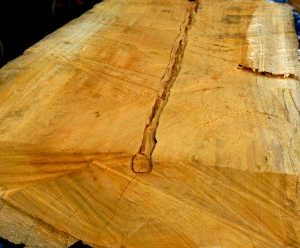 Wood ready to be shaped into a poi pounding boardThe Hawaiian shaped the poi board with a stone adze. 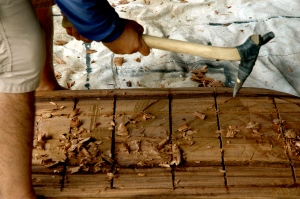 This is how they carved out the poi board with a stone adze. 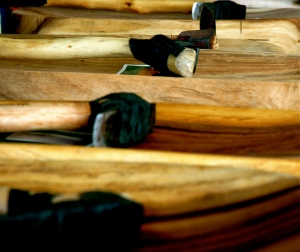 These are the finished poi boards

This is a well used poi board

While at the festival there were a couple of young men in Malos (loin cloth) pounding poi. But I was not about to pay $5.00 to take their photos. One day I will go through my archive of photos to show what it looks like to pound poi.