I was given some money and the order to buy something I like. This is not an easy thing for me to do. My tendency is to hold on and pay extra on bills. Of course this always drives me to deny myself so that I end up charging anyway. Well this time I held on to it, not to pay bills but, to spend it.

A friend at the Museum had graciously given me two tickets to the Queen Emma’s Summer Palace Festival. Last year when I had gone I saw many things I wanted but just could not let myself buy them. This year I was going to use my money gift and, by cracky, I was going to buy some thing for myself.

The festival was extra special for me as I didn’t have to go alone. My daughter accompanied me and it was so nice to have someone to share the day with.

First I introduce my daughter to King Kamehameha and his Wife Queen Emma. No I don’t have that much cachet, the royals were being played by two of the employees from Bishop Museum, one of whom I work under in the archives.

The royals give their aloha to their court

Queen Emma and her Husband Alexander Liholiho gave many of these festivals as a way to collect enough money to help build a hospital where Hawaiians could go  for care. It was also a stipulation when the hospital was built that anyone needing treatment whether they had money or not was to be tended to.

They were also responsible for two major schools, a Church and nursing school. They loved the Hawaiian people and worked hard to make available the things that were needed for the community. Today “The Daughters of Hawaii” put on this festival to earn money to maintain the summer palace. One of the biggest events is the raffling off of a handmade Hawaiian quilt. This was this years offering. No, I’m not a lucky person and as much as I would have loved to have had one of these quilts I left the betting to other people.

These are Haku leis. Last year I admired these from afar but this year it was the first purchase I made. They are made from many types of leaves and flowers. After the plants die they dry into beautiful hat bands.

Handmade woven hats. I’ve always wanted one and they had some really nice styles here at this booth. Besides the traditional Hawaiian hat there were many woven styles from the forties era. 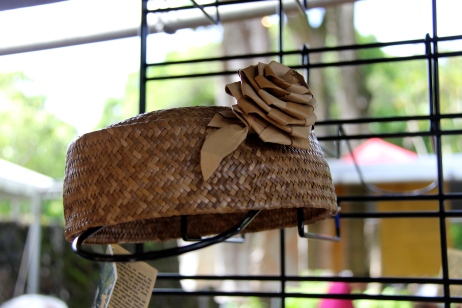 I really loved this one but it did not look good on me at all. It looked wonderful on my daughter but she could not figure out for the life of her where in the world would she wear it. Yeah she could wear it but I wanted it. It stayed on display. 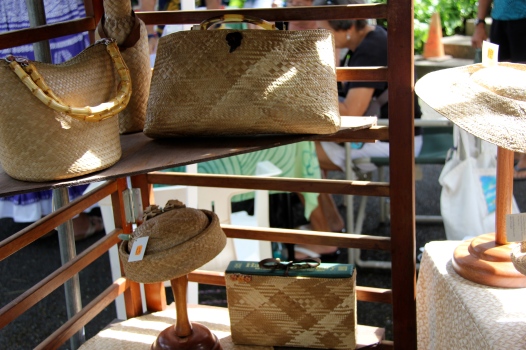 I also loved their woven bags. These women had woven some very unique styles. Not the run of the mill forms. That  made it very hard for me to leave this booth. 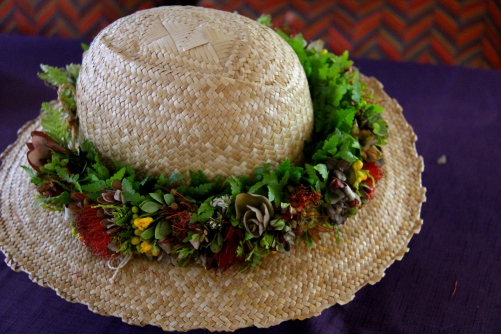 So what did I buy? Well here is my haku on the hand-made hat I bought. Yeah, like I said I had a hard time leaving the booth.

And last but by no means least is the shell lei I bought to be worn with my muʻumuʻu‘s when I give tours at the museum.

I’m still not taking very good photos. Blurry aren’t they? Part of my problem is I’m always trying to get the shot as fast as I can. I don’t like to hold other people up while I fuss with my camera. I’m either going to have to go by myself to events so that I can fuss as long as I want or learn to use the darned camera the right way in the first place.

Well my day was well spent Pun intended. But you know I think the best part of the day was, and it was the free part, spending the morning with my daughter.