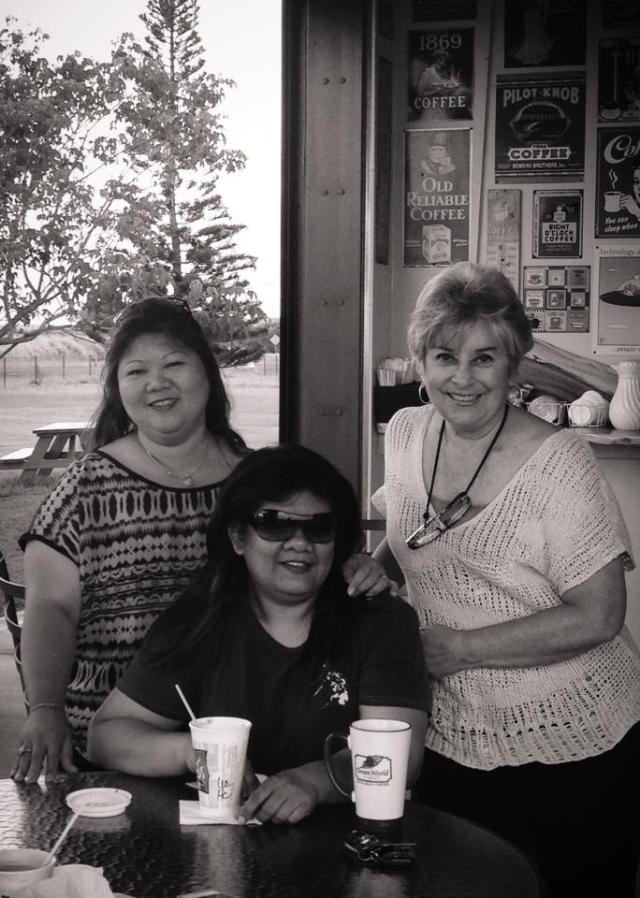 What is a coffee shop and good coffee without good friends to share it with. Our first visit to Green World Farms  coffee shop

It was about a twenty-minute drive and when all was said and done I came home shaking. But, I will  do it all over again.

I drank my fill from a cup I purchased as I was planning to come back more than once.

Visions of Saturday mornings sitting at my computer and enjoying the surrounding country side has already filled my head. Another Coffee shop has been added to my list.

I guess it was pretty strong too as I could barely hold anything with my shaking hands by the time I got home. 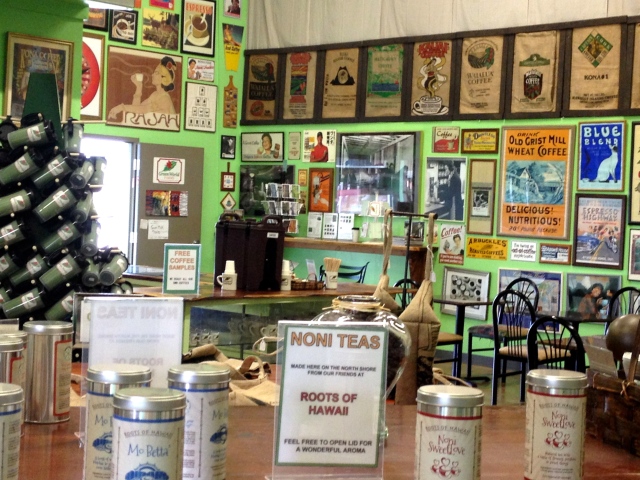 As my friends and I entered Green World Farms it  was like a coffee museum with so much to look at. It must have  been a good fifteen minutes of gawking before we finely got around to ordering our coffee.

Of course I did not bring my camera with me so I had to rely on my trusty phone to record the day.

Loved this old Coffee tin. Oh how I would love to have these for my own.

Ain’t she great. And if you look closely at the reflection in the glass you can see other antique covers

I did not even realize that Kauai had been producing coffee long enough to have such an old poster. 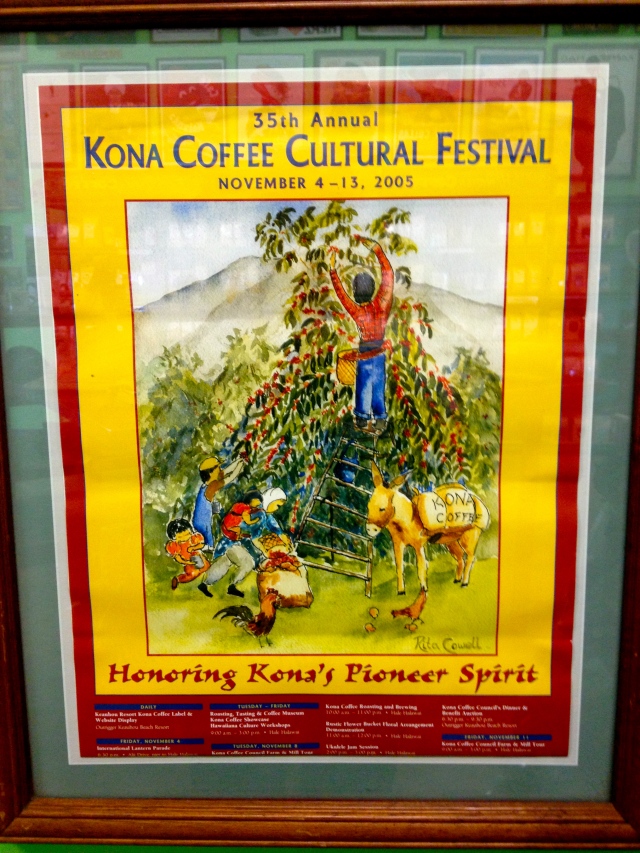 And we all know how much I love the big Island. One day I will have to attend this yearly festival. For sure I will have to look out for these posters. 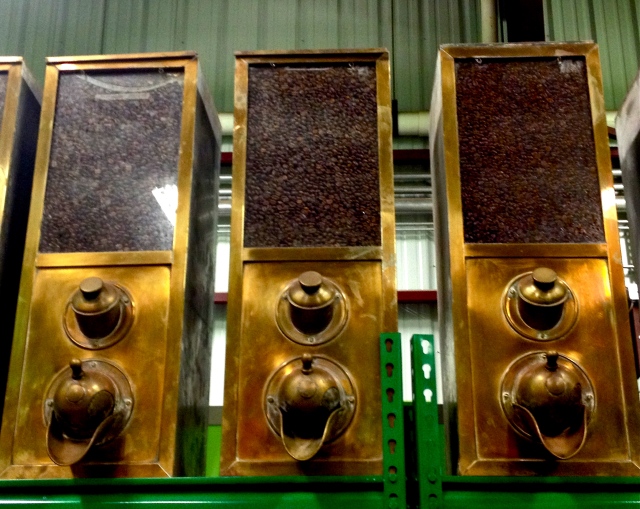 Hmm I don’t know if I could drink enough coffee to warrant one of these old coffee dispensers but it would be nice trying.

Green World Farms made their counters from the fallen Monkey pod.

Green World Farms has started growing their own coffee beans. Here are there plants. They sell all local coffee and support local bakers for the fresh pastries they serve. Great scones by the way.

The view from my new coffee cup. Very nice indeed

The colors of May Day in hawaii

My kids family originally came from the island of Hawaii. It was a small little town with the home sitting less than a blocks walk to the beach. Their great-grandmother who was full-blooded Hawaiian had once owned large parcels of property in the area and it was leased to the sugar cane growers.

Over the years greed, mismanagement and the government soon dwindled the land down to a house.

When ever we visited the big island it was like a pilgrimage to visit this home. When the kids were small we could visit an aunty who lived there and when they became adults we just stood outside and looked as caretakers had been placed their by other family members.

The auana (modern-day hula) competition did not start until the evening. So once again we made our pilgrimage to the ancestral land.
The area where the family lived is called Laupahoehoe. There once was a school situated right off the beach area. On April 1, 1946, one day before my first birthday, while I was safely ensconced in my home in San Francisco, a tsunami hit the Big Island of Hawaii.

The children were playing outside of the school as they waited for class to begin for the day. As the ocean receded   fish began to flip and flop and kids excitedly ran into the wet sand to try to pick them up.

A friend told me that her brother was one of these children. As he occupied himself trying to grab one of the dancing creatures he looked up. A huge wave was headed his way and he knew he was not able to outrun it. He grabbed a large rock in front of him and just held on for dear life as the wave washed over him and then pulled back.

She then said, her brother who survived the ordeal, came away stuttering and has stuttered till this day.

Many teachers and children were not so lucky. If you would like to read more about this here is a site that has information on the tragedy. http://www.tsunami.org/sound042199.html 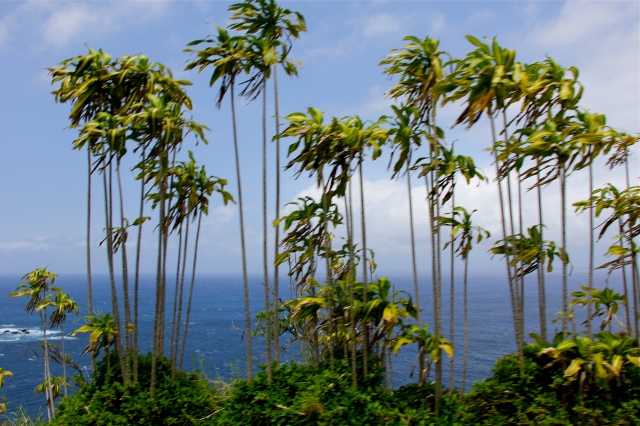 The view on the drive to Laupahoehoe 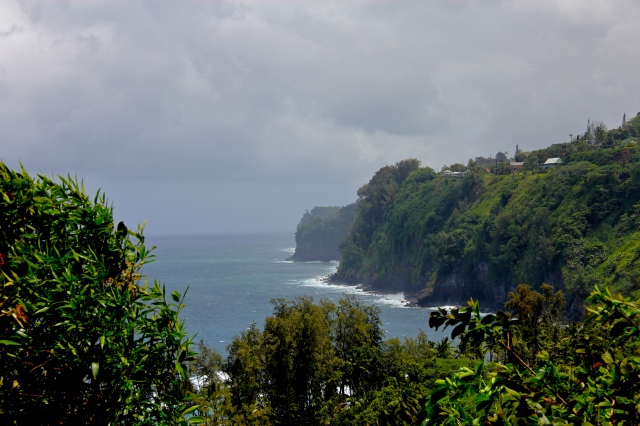 Looking down towards Laupahoehoe

Laupahoehoe ocean front by the house

This grave belongs to the great, great-grandfather who came from china

Since no one in the family can read Chinese we aren’t exactly sure what it says. Are there any linguist out there who might be able to translate? This grave yard is about a 3 minute walk from the old house.

On this visit as we looked for the house we realized that it was no longer there. This was all that was left. It looked as though the house had been bull dozed and shoved to the side of the road. 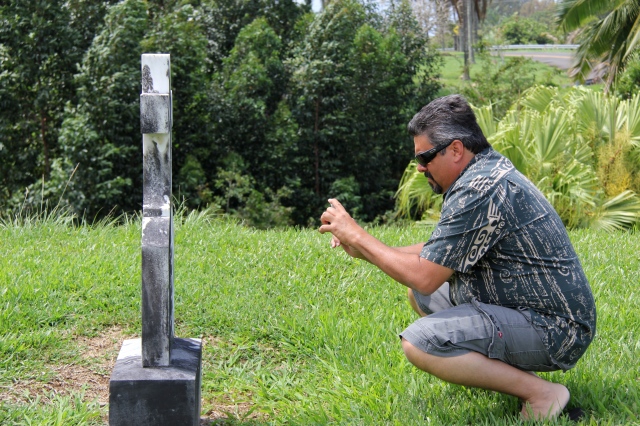 So we drove up to the top of the family compound and to the Catholic church to visit the great grandmother’s grave. Here my son is taking a photo of the photo of his great-grandmother that is inlaid into the grave marker.

It says Sara Matilda Awong. In all the records we have seen she was recorded as Sara Keeaumoku Awong. Were not sure if it was a Catholic thing to leave her Hawaiian name out or maybe since it was her maiden name it was not recorded.

The view from her grave looking down to the ocean

I must say, her grave rests in a beautiful spot. This was the view as we left the cemetery.

Heading back into Hilo. It still is a pretty old town with many of the old buildings remaining.

Anyone who has  been to Hilo in times past always remarked on the fact that even into the 70’s they still had parking meters where you still paid a penny to park. Not so anymore. It is now free! How can you beat that? 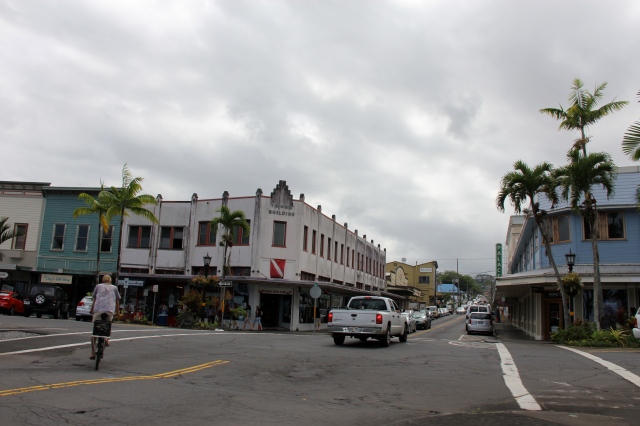 We started out early in the morning so that we would have time to take in the Merrie Monarch Craft Festival that we had been told not to miss. 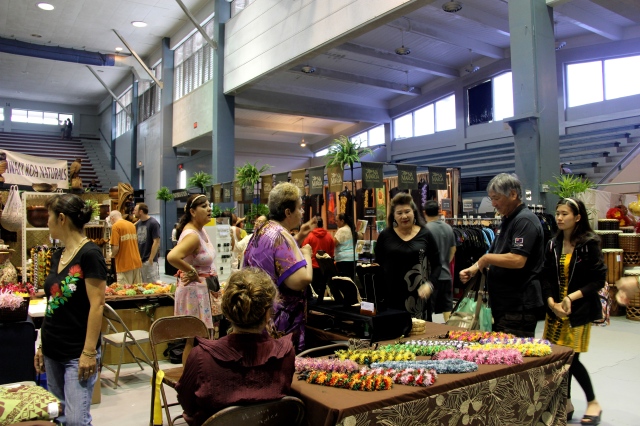 Walking into the Craft Fair area I was surprised at how small it was.

But though it was small it contained beautiful, locally crafted items. There were no plastic, quickly put together  crafts that seem to proliferate at fairs now days. 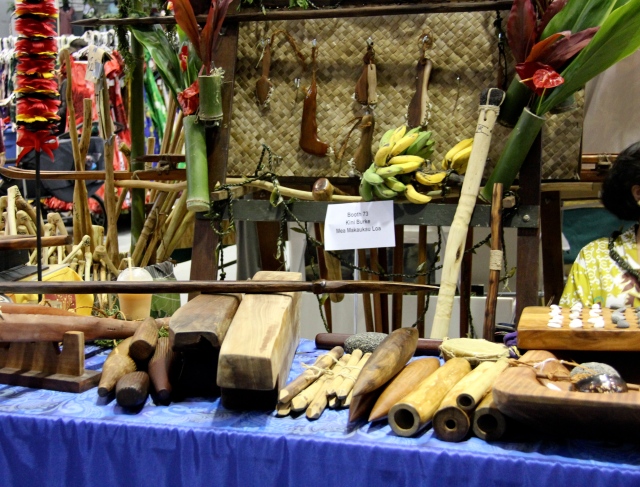 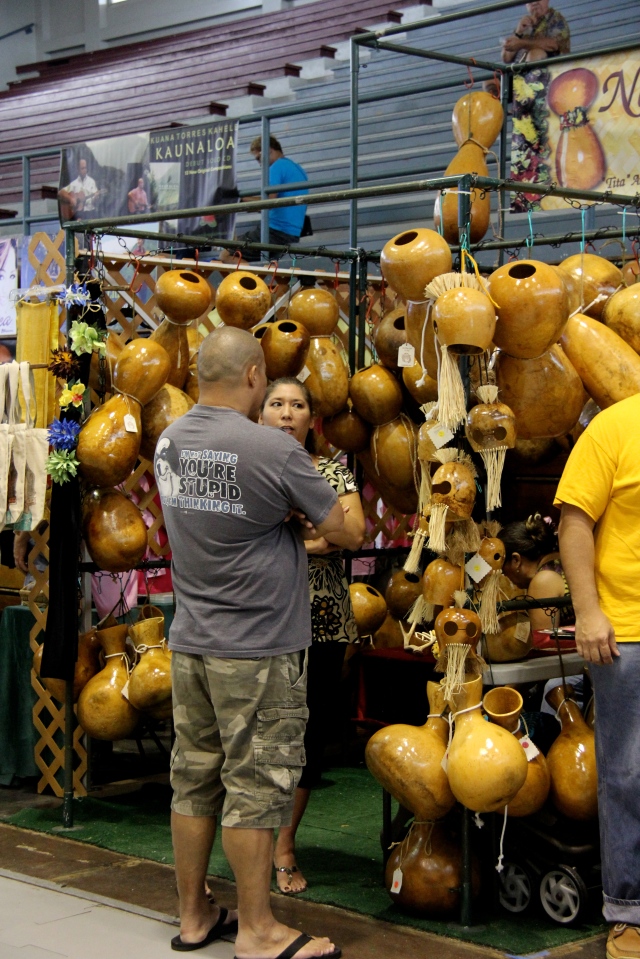 Ipus made from the squash gourd plant. The Hawaiians used these for many things like storage for food, water, and goods. They even piled them into their canoes when they fished in case of a shark attack. If being attacked they would throw these out into the ocean. When they splashed the sharks would then turn around and be diverted. Then and now these ipus are used for hula dancing as you can see in many of the dance photos. 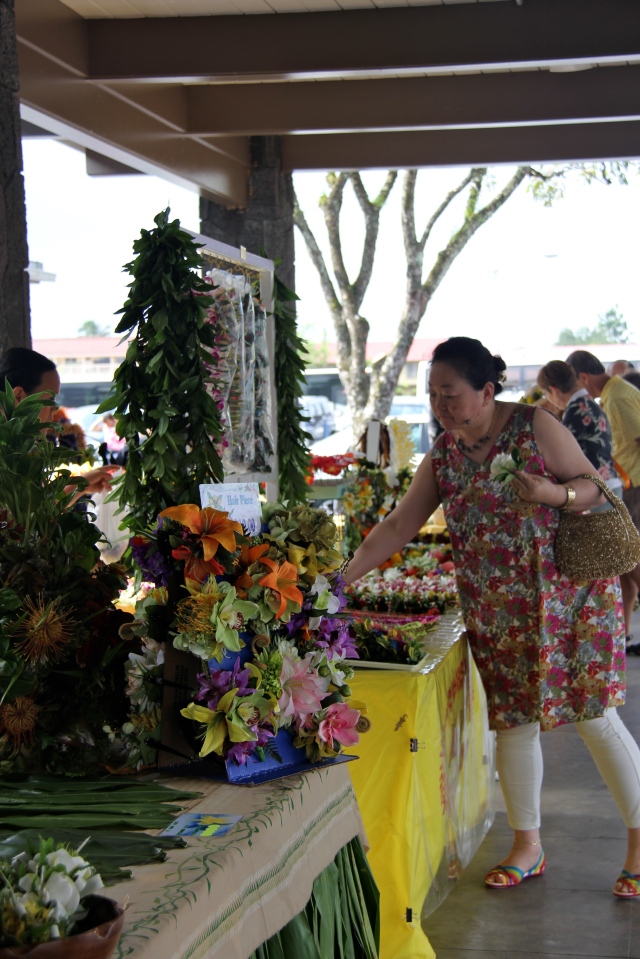 Dancers and visitors alike bought these to use as part of their headdress. Many women in town wore these on the side of their head with their hats cocked at an angle and they looked stunning. 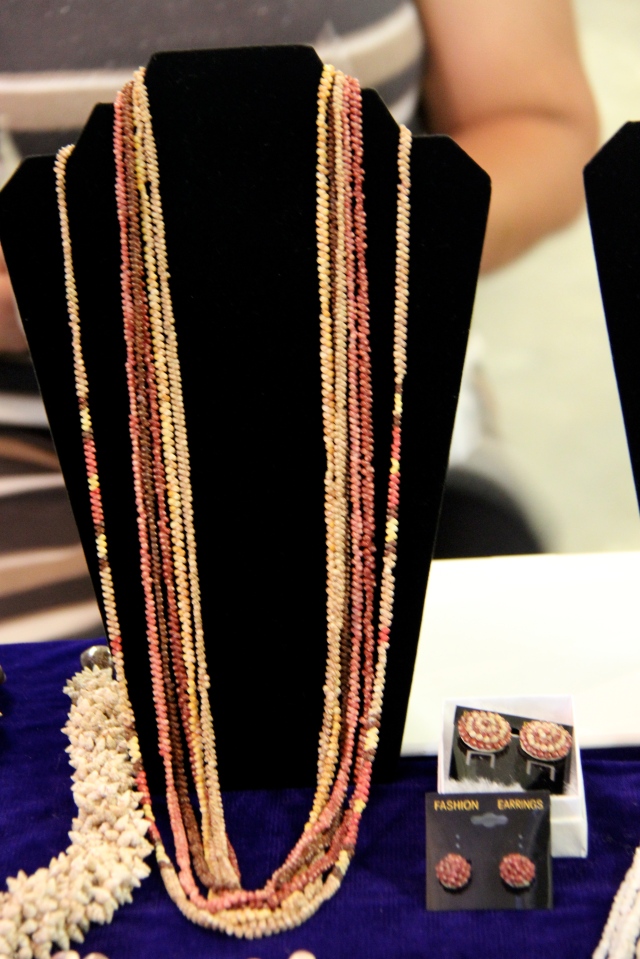 And here are the Niihau Leis. Oh how I wished I could afford one of these. The shells come from the little island of Niihau that is mostly populated by Hawaiians. It is privately owned and so not many people can even see the island only the beach. The residents of the island gather these tiny shells to make the necklaces. These can sell into the thousands.

Though a small craft fair, in this case. good things came in a small package.

In my next blog I will post the photos of the last event, the auana or modern-day hula

While I’m working up the energy to finish my Merrie Monarch postings I thought I would just post some photos I took today of my grandson’s Lei Day Activities at his school. Most schools in Hawaii put on a big Hawaiian pageant on this day and Kaleiopuu Elementary School was no exception.

The teachers went all out and put their heart and soul into this event and the kids looked beautiful and performed perfectly. I hope you enjoy this little break with photos and I won’t interrupt until next time.

Oh, and my grandson is not in any of these photos.

THE HIGH CHIEF OR KING AND HIS COURT ARRIVE 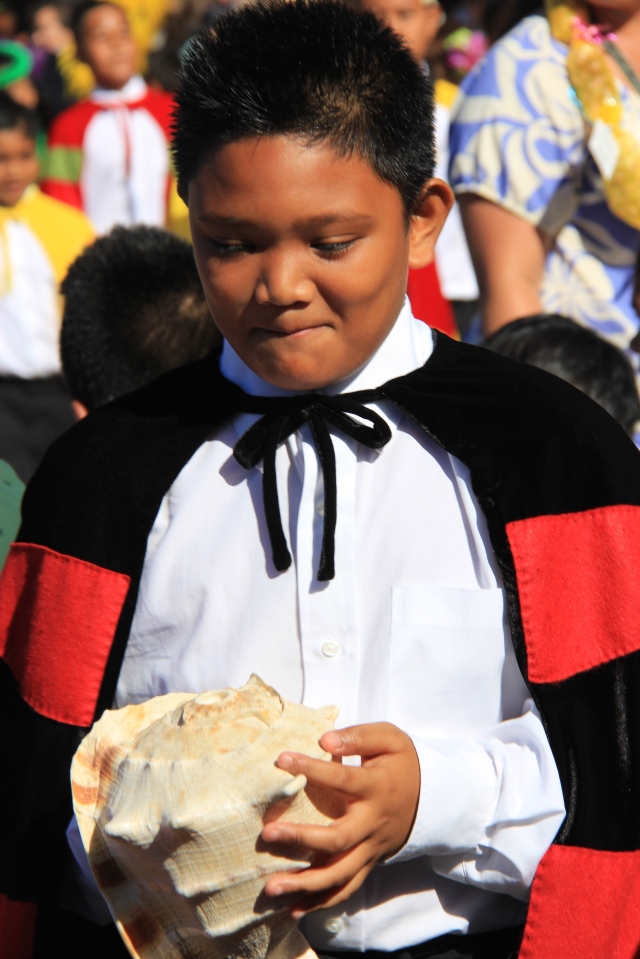 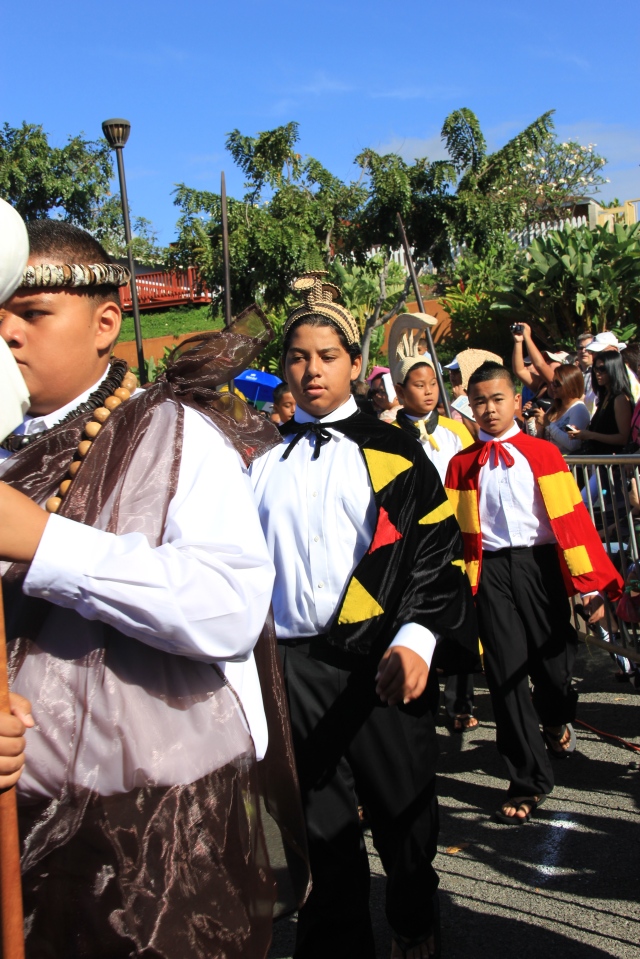 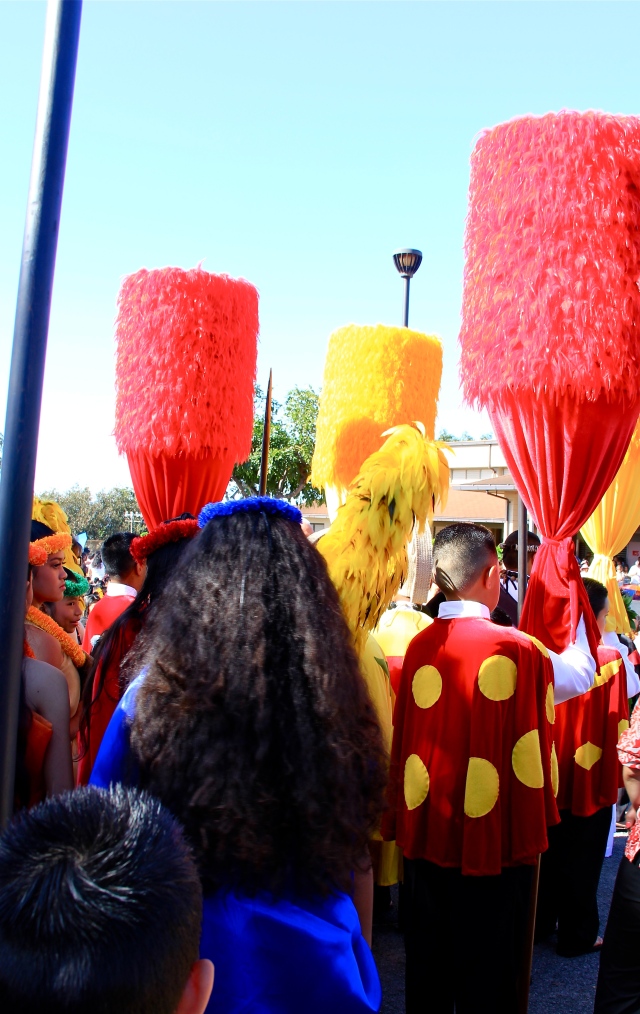 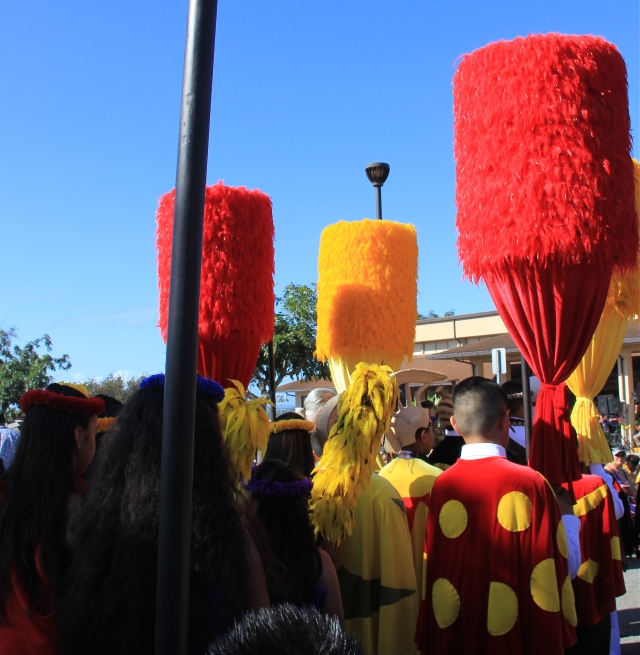 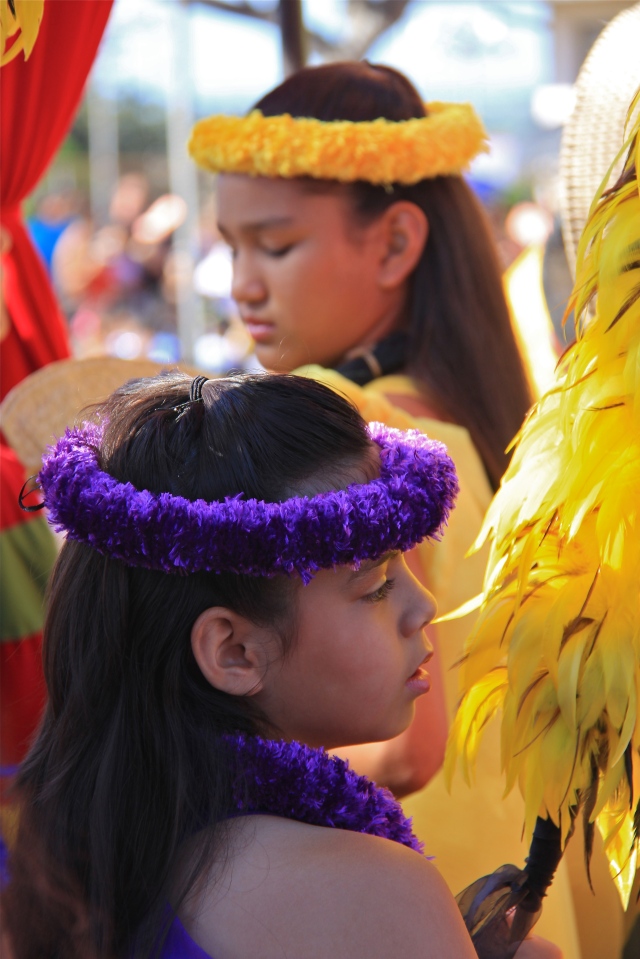