I needed tea and a little staycation. Chinatown has always been a way to take a trip without leaving the island. No matter how many trips I make down there I will always find many curiosities that make me realize how little I know about how people live around me.

As I’ve stated in an earlier blog going on photo trips should never be done with friends or kids both of which I was accompanied by on this day. Every time I stopped to take a photo I would look up and my friend and the kids were a half a block ahead of me.

By the end of the day I was limping to keep up with her. The only time she paused was when we came to a jewelry store. Where I on the other hand found all of the displays in front of the stores fascinating. 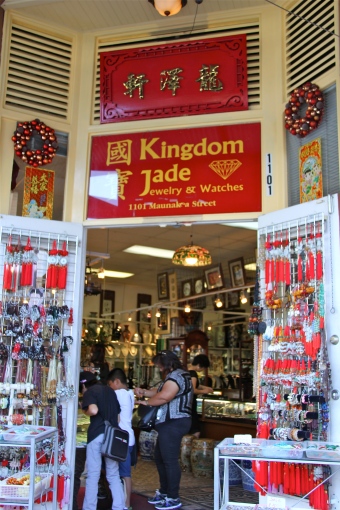 Here my friend paused. I was bored as I’m not a jewelry person but I thought this is not something everyone sees everyday so I took a few photos. Of course as I took this photo I was blocking the many, many people rushing to and fro and once again a blurry picture. 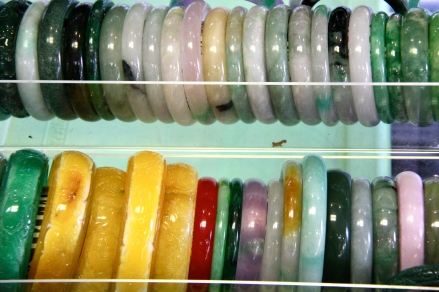 Wow, Jade bracelets for $20.00!! Yeah and I bet they are injected with dye. But… their colorful. 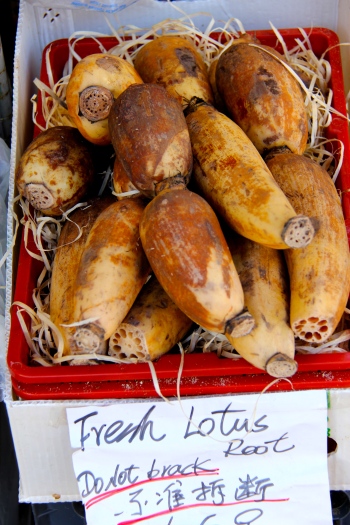 Now these are the things I found fascinating. Hum, how do you cook lotus root. I was trying to get the photo when out of the corner of my eye I could see my friend moving on down the street. I quickly took the shot just as a man emerged from the side of the store. He lived in one of the new apartments that had been built in the nooks and crannies of China town.

Quickly passing me by he said under his breath ” boy you must really lead a boring life.” As I released the shutter I looked up at this tall, wrinkly, skinny guy and looked him in the eye and said, “no, I’m quite happy with my life and find it quite interesting.”

He was shocked that I had heard him and even more taken aback that I stood up to him. I told him that I had friends that have never seen some of these things and I liked to photograph these for them. He then acquiesced but then got belligerent again.

Why do you need to send them photos when they can look it up on the web and with that he quickly turned around and took long strides down the street.

At first I thought yes I guess they could look them up on the web and then I remembered what would they look up if they have never heard of them? What a jerk that guy was. Then I looked to my left and saw that my friend was already at the end of the street. Damn I was not even going where I wanted to because I was trying to keep up with her. 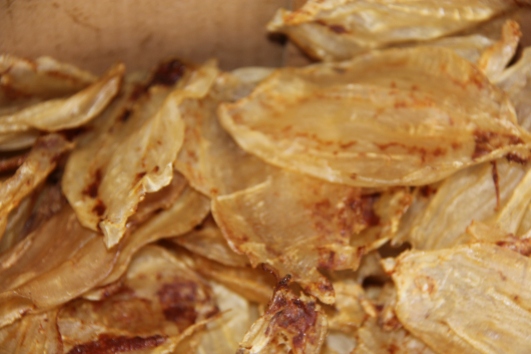 Do you know what these are? if so you probably have already looked them up on the web:-) This is dry cuttlefish. At least I think it is. I didn’t have the time to ask. Limping quickly down the street. 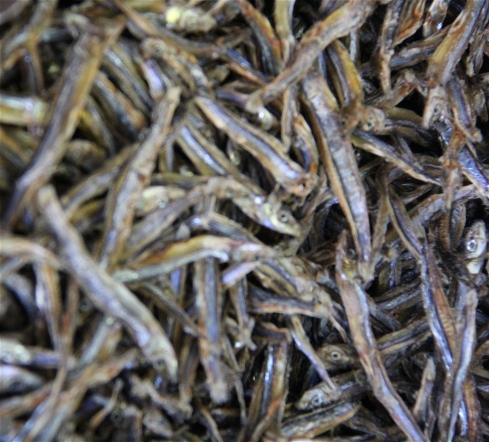 These were packed in like sardines, in fact I think they are. Dried sardines. Rush, rush, rush. 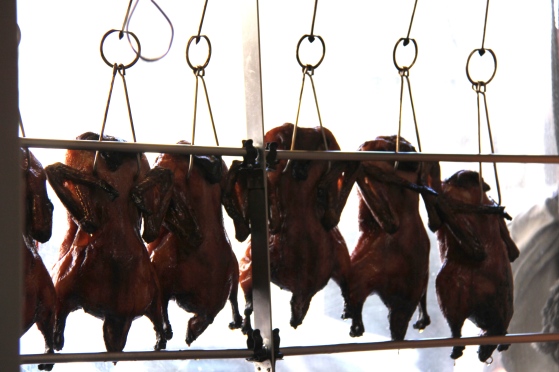 Now this I took a chance on as my friend paused at a store. I ran inside and took the photo. I could see it was kind of dark but I thought I have to move on. Running quickly to the place next door. 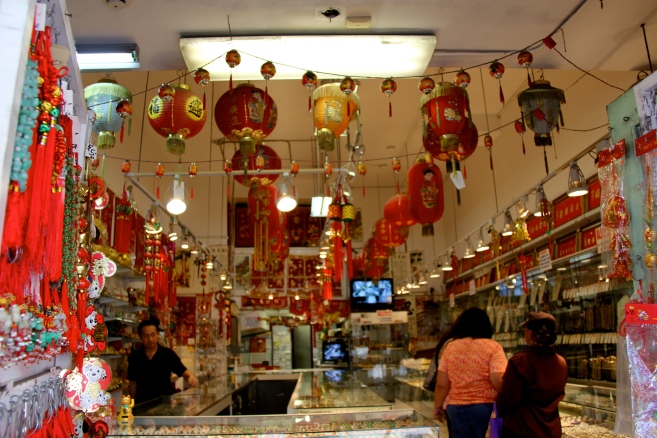 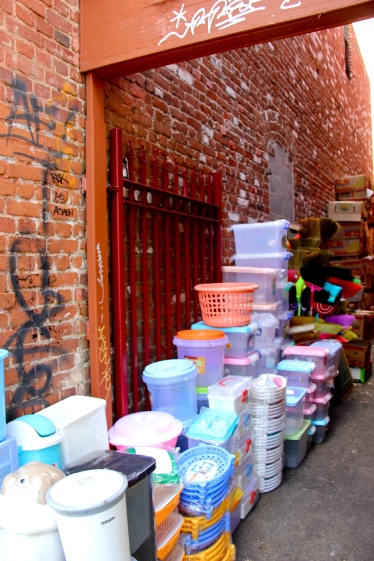 Oh the heck with it I thought. Look at all these colorful pieces of plastic. This store was so packed that there stock was piled in the ally next to it. 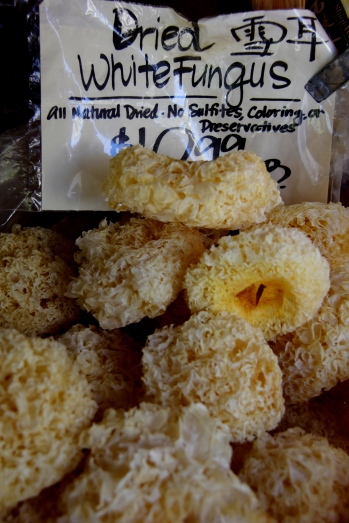 Now how often do you eat this? I thought they were  sponges. But the sign said, dried white fungus. How interesting. What cook book would I find a recipe for these? Bored indeed. Humph! 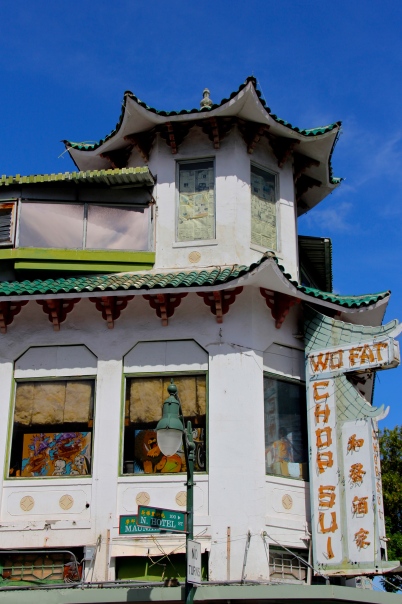 As we headed back to the car I quickly took this shot. Originally I thought it was an interesting building showing the typical Chinese architecture. It was not until I got home that I realized that this was one of the finest restaurants in China Town in its day. One of the places I had always hoped to be able to eat at if I was so lucky. How sad to see the state it was in. You can go to this site if you would like to see what it looked like in its glory day. Wo Fat 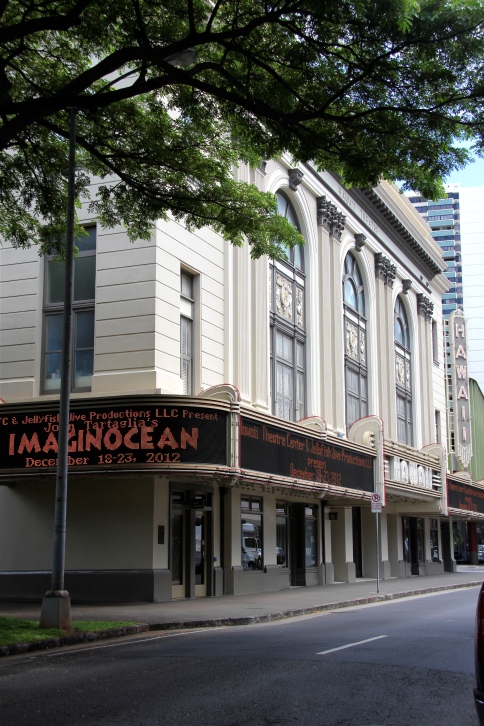 Now for the total opposite. This was the movie theater my family and I went to years and years ago to see “Bugsy Malone.” Yes that many years ago and it was falling apart at that time. Now it has been totally restored and has really brought up the caliber of the neighborhood. 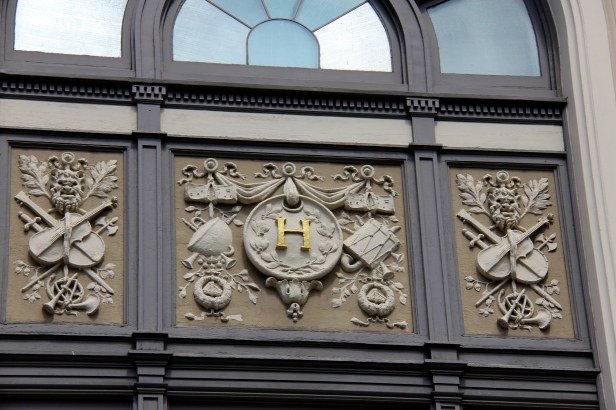 Thankfully it was restored. As many times as I had been to this theater, I had never seen these panels. Beautiful! But as I took this last photo I turned to see my friend was already a block away and by now I could barely walk with the blister on my foot from walking so fast. Limp, limp, limp.

Next time I’m going by myself. But boring this was not. I’m thankful I can see wonder in mundane things, beauty in a restored building and the ability to share it. I think it was that idiot of a man who must walk as though he was on a walkalator, passing life as he glides by.

7 comments on “China Town is Not Boring”