The plantation village is a conglomeration of restored plantation houses that were transported to this area of Waipahu to be used specifically as a museum. But people did live and worship in these building when they were working on the sugar plantation in the early 1900’s.
The first structure we visit is the Chinese Cookhouse. It is a restored structure originally built in 1906. Unfortunately I did not have time to go back to take photos from the outside as the tour moved on pretty quickly once we got into the village itself. 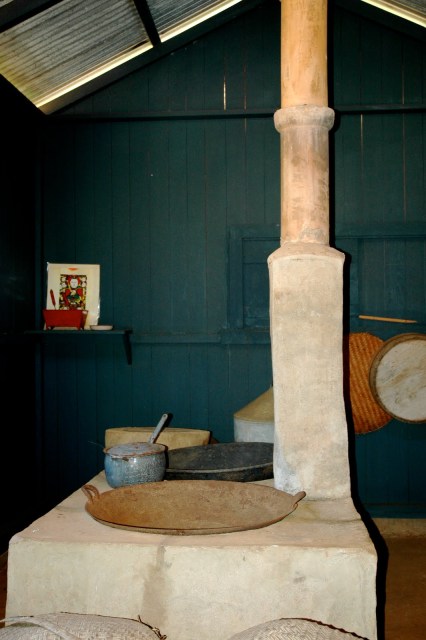 The large wood burning stove is inside of the cook house.The small alter in the back houses the “Kitchen God“ 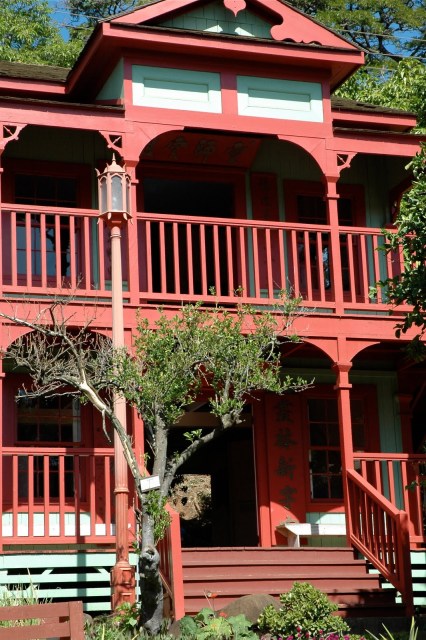 From the Cook house we head up the steps of the Chinese Society Building. The downstairs was used as a large meeting room for classes, and celebrations such as weddings and birthdays and society celebrations.
Chinese values made it possible to pull money together to help one another in order to invest in land to begin growing rice. The Chinese would meet at the Society Building to  discuss among other things how to grow their money.
Rather then slave for the sugar growers they were able to raise money without being enslaved to the plantation country store. The sugar company managed to charge many poor workers for everything.  Immigrints never had money at the end of their pay period. Once the Chinese started growing  rice they would use their earnings and profits to help fellow Chinese to start other types of business. 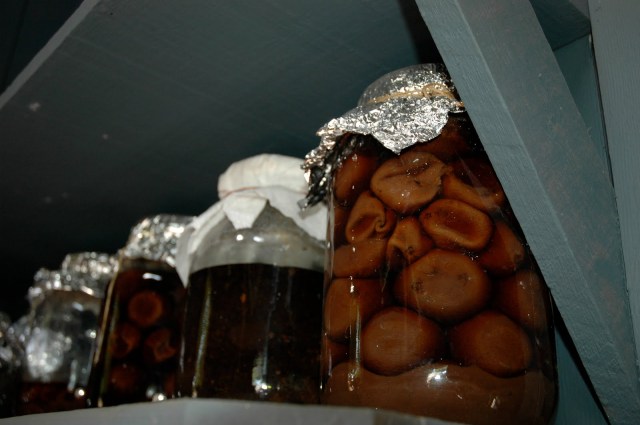 These lemons were on the shelf of the cook house. Till today people preserve lemons like this by leaving them in the sun in large jars. Mixed with Honey and in a hot tea it is the best thing for a sore throat. At least when I’ve used it. It is nothing to eat lemons like this that are as old as 7 years. 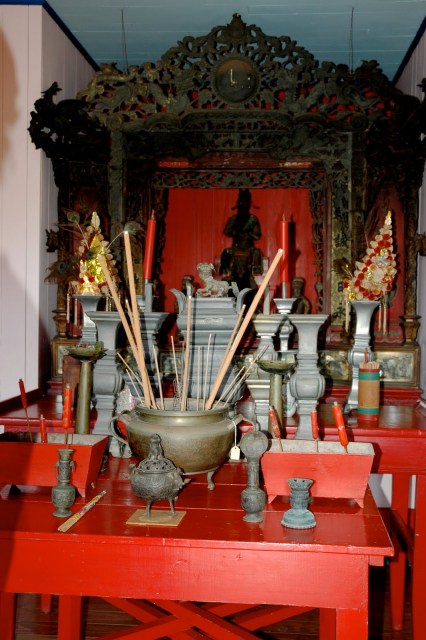 The second floor functions as a place of worship that contains an alter with a shrine.

The Shrine dedicated to the Chinese God of War. 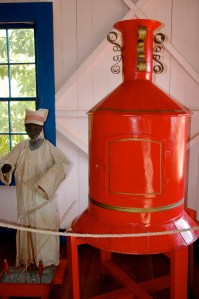 It would be to hot to light this furnace here in Hawaii as the weather is so warm but if ever you felt the need to burn some money this would be the ticket. This is where the Chinese burned their “Hell bank note.” It is made from joss paper. Joss paper is made from a papier-mache form of material. This would be used in different ceremonies including funerals.
Many circumstances influenced the Chinese to want to take a chance and immigrate to Hawaii. Civil unrest, the Europeans forcing themselves upon China, and  the Opium Wars were just a few of the events that took place that impacted their decision.
The westerners feared that the Chinese with their ability to grow in business would soon become a threat to them. Out of this fear laws were enacted to limit the immigration of Chinese. The Sugar planters were encourage to broaden the immigration by hiring a multinational labor force and then pit them against each other so that they would not be able to form any kind of union or become a threat.
The Chinese with their ability to pull their money (a hui) eventually moved downtown Honolulu, started business and bought land. As they prospered the plantations started to bring in other nationalities to build up their plantation workers.
The fourth installment will cover the coming of the portuguese and maybe a little ghost story thrown in.
If you would like to read more about the Chinese I recommend this little pamphlet that is packed with information and was helpful in my blog. “Chinese Cookhouse and Society Building. You can acquire it at the Hawaii Plantation Village. Once again this is their website. http://www.hawaiiplantationvillage.org/
PART TWO OF THE WAIPAHU PLANTATION VILLAGE
As we leave the Plantation Museum I’m walking quickly to catch up. I’m excited, were on our way to the houses. As we walk down the ramp our guide points out all of the flags flying in front. Each represents a nation who had citizens immigrate to the islands to work on the sugar plantation. Seeing them flapping in the breeze representing all who had come made it tangible. I’d only thought of the Japanese and the Filipino as plantation workers before. Now I realized the extent to which the Sugar Planters had reached out and subjugated people with hopes and dreams, to a life of harsh and oftentimes inhumane conditions. 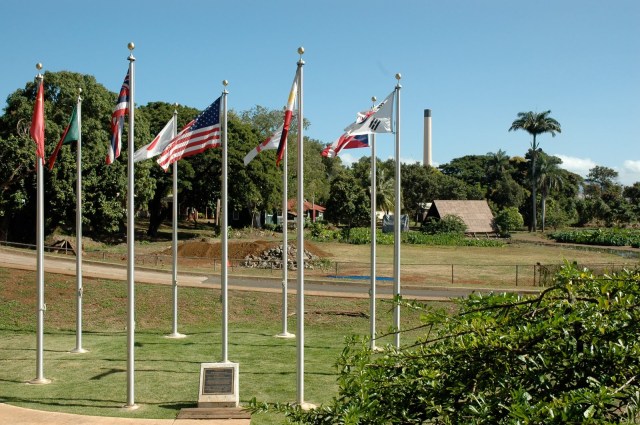 Flags From China, Portugal, Japan, Korea, Philippines and  Hawaii Amongst Others
I could see the homes just past the flags.  I started to head in that direction when I noticed that the guide was going in the opposite direction. He was now talking about the Bodhi Tree which was a direct descendent  of the tree that Buddha had sat under. 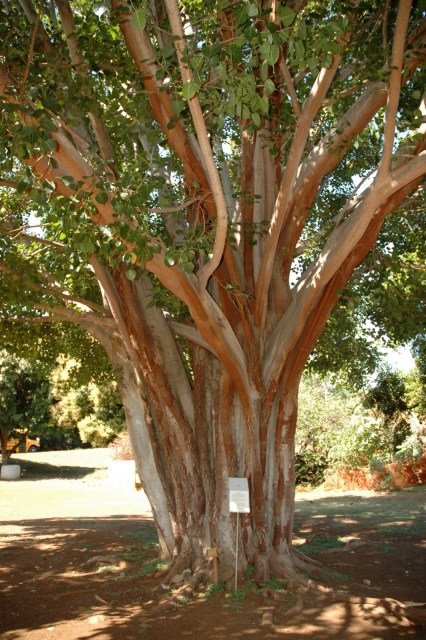 Bodhi Tree
As he went on about the garden I once again began to take photos as  I was very familiar with the plants that he was telling everyone about. I noticed all of the tangerines filling out one of the trees. Snap, another photo. 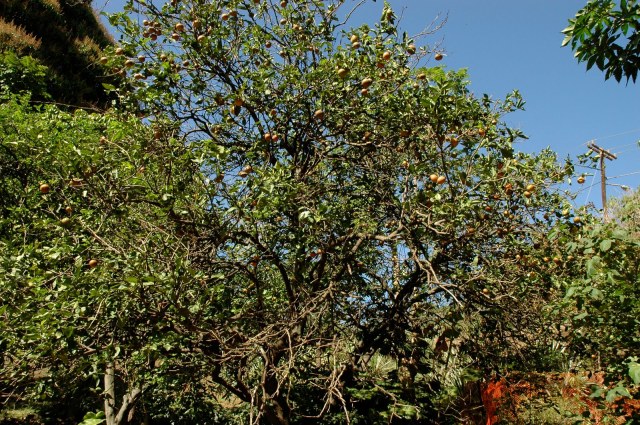 Tangerine Tree
Then I noticed a huge Mango tree and it was packed with blossoms unlike I had ever seen in Hawaii. I thought maybe they had fed it something special. When I asked him about it he apathetically answered that the tree just gave fruit like that every year. He continued on about something to which at this time I was not listening to as I was so mesmerized by the Mango tree. 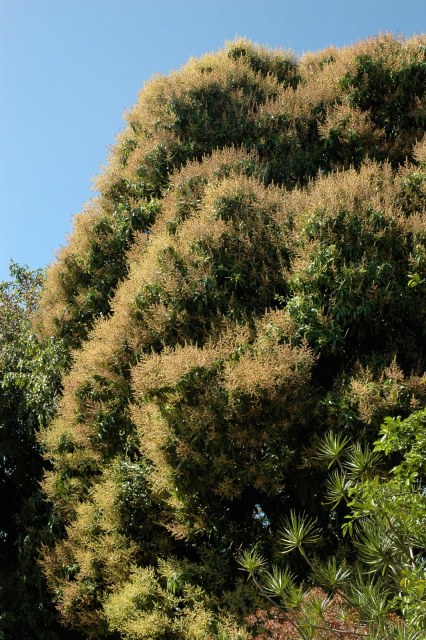 Mango in Bloom
Again the clock was ticking. I was beginning to think we would not be going to look at the houses. Now it was an hour into the tour. As I turned from the mango tree to walk over to the guide, he was now explaining about some Korean totem poles that were called Jang seungs that were objects of Korean natural religions.
So now I had heard about the Japanese religion, and now the Korean religion. The thought ran through my mind that maybe they don’t go to the plantation houses but just have them there for you to ponder and contemplate.
I had just over an hour left before I had to leave and I was not sure when we would head over to the other side. 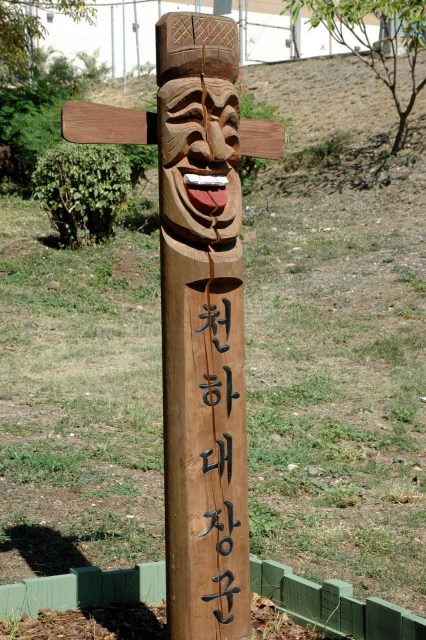 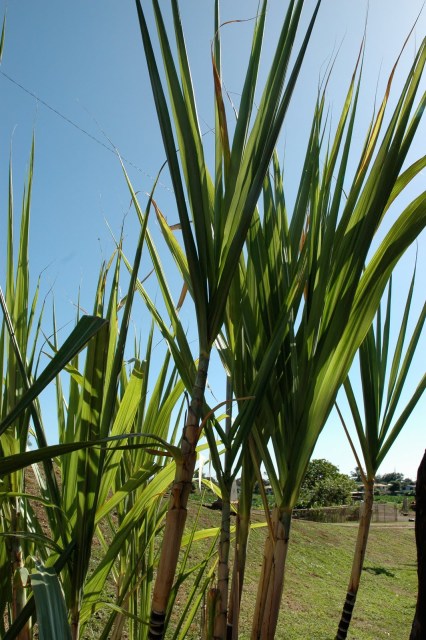 Hawaiian sugar Cane. Though Sweet It Caused Much Sorrow
At last our guide said to us that we would now enter a time tunnel that would take us into the past. He marched towards a galvanized tunnel that went under the entrance road and we finely came out on the other side and I still had a little over an hour left.
To be continued: Part three, Wait I want to take a photo!