It’s Halloween evening. You’ve been scaring people all night and your tired. You take a break to sit on the front porch of this house. It was once the house of a Portuguese family who worked on one of the sugar Plantations.

The Portuguese were the luckier of the plantation workers. They were considered white. On the island of Maderia there was a blight that was destroying the vinyards so many farmers took the opportunity to come to Hawaii. Unlike many of the other nationalities that immigrated to work on the plantations the portuguese were allowed to bring their families with them.

Because they were of the lighter race many of them were chosen to be lunas or foremen. It was not unusual for these lunas to use whips and physical force on the laborers. But this was not true of all. But it gives you an idea of what it was like to work from 6:00 AM to to 4:30 PM.

Upon newly arriving many of the different nationalities lived in crowded and unsanitary conditions. The houses that you see here were not what they would have arrived to. It was over time that the workers were able to improve their surroundings. 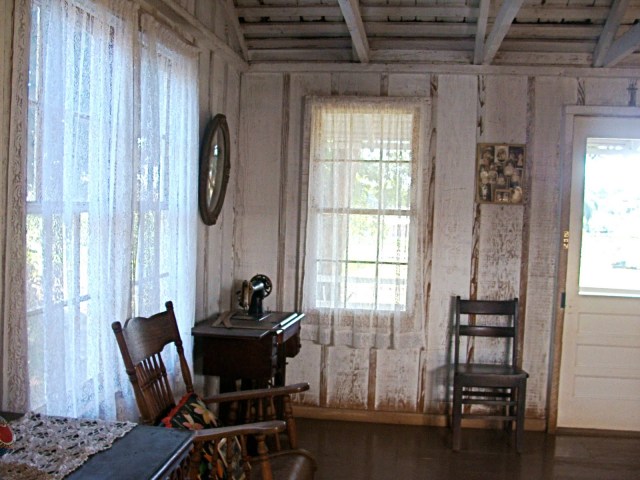 Living Room of the Portuguese Home

Kitchen in the Portuguese Home

The portuguese were famous for their breads. And many of them after leaving the plantations started up their own bakeries. Most famous of the breads, we call Portuguese sweet bread or Pao Doce. Here is a wonderful website that has the recipe for the bread if you would like to try. http://www.hilo-hawaii.com/recipes.html
My kids are part Portuguese and I remember my mother in law saying that they would bake the bread with an egg in the middle. I’ve never seen that. In fact the Portuguese sweet bread you get now days has no comparison with that of the past generations.
Getting back to the front porch. My friend, who was sitting and resting, sees a little girl in a white dress walking along the dark path by herself. She called out to the child. Where is your mother? You shouldn’t be out by yourself. The little girl looked at her and skipped off.
Later that evening when all the scary cast came together and all the visitors to the “Haunted Plantation” had headed home, stories were told. One story was about the portuguese house. ” A child had died in the home” someone had said. The description of the child was given as she was often seen.
My friend said, “I saw that Child.”