THE RIGHT TO FLY THE FLAG 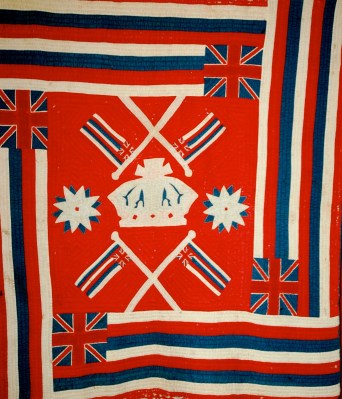 Liliuokalani Protest Quilt
In the past there was a lot of debate about a planned community here in Hawaii not allowing a resident to erect a flag pole so that he could fly the American Flag.  Much debate was going back and forth. Is it the fact that he wants to erect a flag pole or is it the flag that they don’t want to fly? What ever the problem, it made me think about the above quilt.
I’ve read that this quilt was sewn by or parts of it were sewn by Queen Liliuokalani while she was imprisoned in her palace. The Hawaiian flag was no longer allowed to be flown and the American flag was raised in it’s place.
Many Hawaiians protested the fact that their flag was no longer able to fly and that they were aware that their islands were under attack. This quilt amply displays their feelings very well.
If you look at the bottom of the quilt you will notice that the canton is in the upper left hand corner where it should be. But if you look at the four flags in the middle of the quilt you can see that the cantons are upside down, the international signal for distress.
The flags are flying from Kapu (forbidden or do not go near) sticks that are placed in front of the crown. In ancient times these sticks would be staked in front of the Ali’is home. It was considered a protection for him. It meant that you were forbidden to enter. These Kapu sticks placed before the crown show that they are protecting their Queen.
So the quilt is a protest of the flag not being flown, the Queen that is imprisoned and the nation that is under attack.
Many of these quilts proliferated during these sad times made by women who wanted to put them above their beds so that they could say they slept under their flag and woke up under their flag.
This flag quilt can be seen at the Bishop Museum along with some of the history of Queen Liliuokalani.
If you would like to read a little more about the kapu sticks you can go to Kapu Sticks